Google I/O 2013 brought a lot of changes to many apps and services from Google that we love and care about as users. This post offers Google I/O 2013 highlights.  I will not go into much detail and will not cover developers related changes.

Some of the biggest improvements announced yesterday were related to search, communication, maps and photos. Over the next few days, changes are being rolled out to users.  Notable changes are new Google+ interface, Google Hangout application replacing Google Talk and such…Keep reading to know more.

Google Play Music All access starting at $7.99 per month.

Google Play Music All Access is a new monthly music subscription service similar to Spotify, Rdio and others that lets you listen to millions of songs across your devices. You can create a radio station from any song or artist you love, browse recommendations from our expert music team or explore by genre.  Google Play Music lets you combine online collection with your own collection. You can store 20,000 songs for free in the cloud and listen to them alongside the All Access catalog. It’s $9.99 a month, and you can try it free for the first month. Or better yet, start your trial by June 30, 2013 and you’ll pay only $7.99 a month. 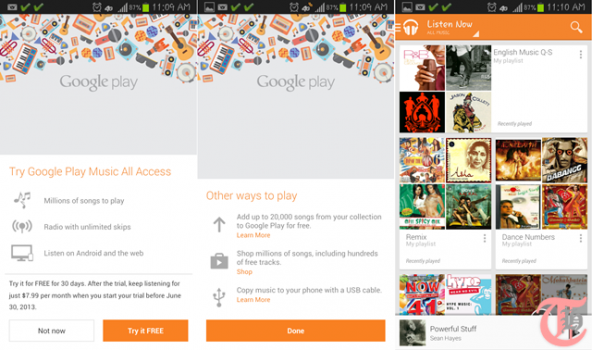 Google is launching Google Play Game Services that help create the next generation of games with social twist.  Very soon users will be able to challenge friends on Google+ in a real-time multiplayer games.  Everyone will be able to participate and compete in a game as if you are in a real world playing face to face.  You can read more about it in detail on Google Developers Blog.

Get a ‘Special’ Samsung Galaxy S 4 UNLOCKED with Google latest Android platform and software for $649.

Google introduced a multi-column (responsive) layout that changes to one, two or three columns depending on your screen size and orientation.  Photos and videos now fill the entire width.  Besides that Google+ team added some cool animations to the sharebox, menus and the cards.  Most users are already using the latest Google+.  Google+ now automatically finds the relevant hashtag (keyword) for your content.  Check out the demo video below and read more about it here on Google+ blog.

Free and standalone version of Hangouts offer rich and responsive messaging with photos, emoji and real-time activity indicators.  All conversations are saved in history and you don’t get the same notification on multiple devices.  Once you see the notification on one device, it gets cleared from other devices.

Hangouts also lets you make a free video call to everyone – 1-on-1 or with group of friends.  The app is available in Google Play, Apple App Store and Chrome web store.  It’s also available in Gmail and Google+.  Hangouts in fact replaces Google Talk and soon it will include SMS functionality too.

Google Now mostly works in predicting information you might need at the right time.  Google added few more cards to Google Now and the ability to set reminders by voice.  You can also pick a time or place to trigger these reminders.  Complete details here…

Next generation of Google Maps that is smarter, faster and more useful.

The next generation of Google maps removes clutter to add more useful and relevant information.  It is now easier to find the best local places.  Meet the new Google Maps below:

Don’t worry, it’s not any Google service. Now it is your turn to launch Google Play Store on your Android devices and check the app updates.  There will be few apps you need to update from Google.

What do you think about all these new things Google announced.  Which feature excites you the most.  Let me know in comments.

I will space out for the next few days some more detailed posts about these changes.  Is there anything specific you want to get reviewed earlier?  Let me know.