Spotify is one of the best music services out there.  Spotify apps for music discovery separates Spotify from other services like Pandora and all.

To listen to Spotify, you need an account that can be created by linking your Facebook account.  Once you install the Spotify app on your desktop or smartphone, you would have access to millions of songs.

One of the best features of Spotify Desktop is the music discovery apps.  Just browse the ‘App Finder’ section and install the following apps to see how it changes your Spotify experience drastically.

With these apps, you are not limited to what you have in your music library, you can listen to some of the best playlists, collections and artists out there put together by various users and curators on Spotify.  You may also chose the songs based on your mood and interest.  Let’s look at some of these cool Spotify apps below.

The best feature of Moodagent app for Spotify is that it mixes the songs based on moods.  These moods could be sensual, happy, angry, relaxed….you get the idea.  Select a mood and let Moodagent automagically create a unique effortless playlist for you.  The playlist can be further optimized by selecting the control curve.  Check it out to see what else it has to offer.

Tunigo is another Spotify app that curates various playlists based on genre and mood.  For example, you could play Rock, Party, Pop or Urban songs.  Select Mood to specify what kind of songs you would like to play.

You could also hit ‘Subscribe’ to keep it in your collection the playlist you want.  That would make a ‘Live Playlist’ for you that keeps getting new songs as soon as Tunigo adds songs to that genre or mood.  Nifty…hmm…  Check it out. 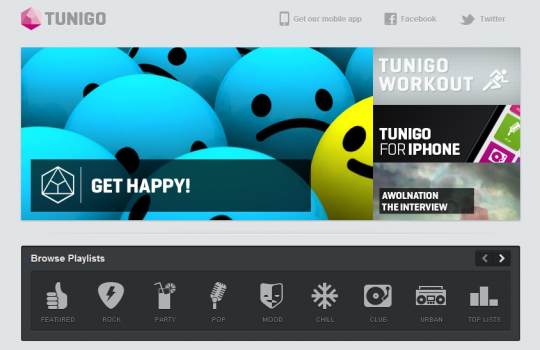 Rollingstone is a Spotify curator app that curates all kinds of playlists for you.  For everything there is a playlist – ‘Best songs of 2012′, ’50 Greatest Guitar Songs’, ‘Reader’s Picks’ and others.  Use this app to listen to some of the best albums, artists and playlists based on those. 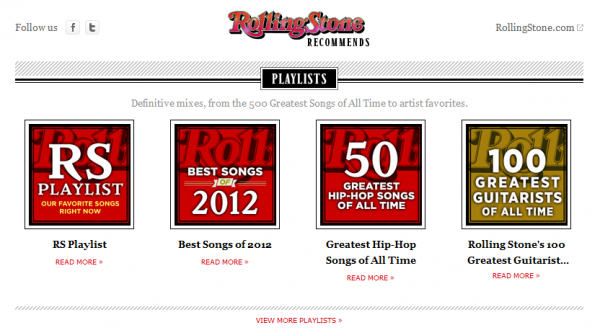 Billboard is another Spotify curator apps that gives you access to best songs of any kind.  ‘Hot 100’, ‘Billboard 200’, ‘Rock Songs’ and other genre based playlists are some examples of what Billboard curates.  Check out this music recommendation Spotify app. 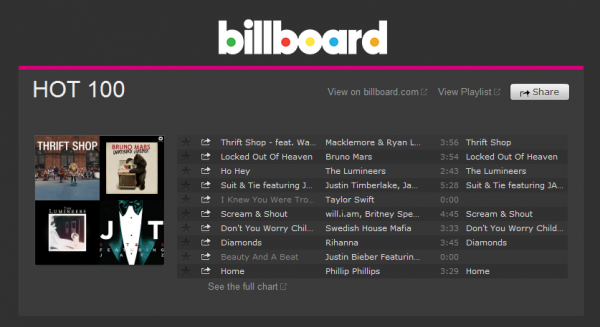 Last.fm has been there for, I don’t know how many year now.  Last.fm actually scrobbles (listens to) everything you are listening to on Spotify and other apps.  Based on your listening habits, it offers it’s recommendation of what you may like.  Also, what your friends on other networks are playing, it learns and suggests you some of that. 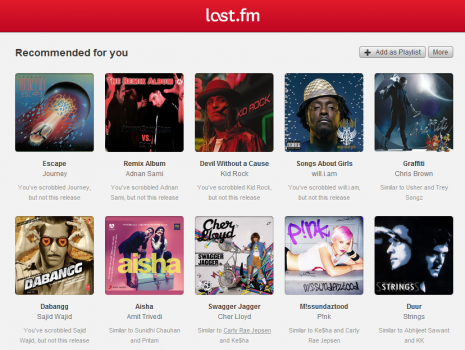 Also based on your choice of particular artist or genre, it recommends you other albums of those artists and things like that.  Essentially it broadens the overall usefulness of Spotify by mixing your own listening habits.

Besides these 5 Spotify apps there are so many of them out there that it was really tough to choose just 5.  Based on your particular interest, you may find some other Spotify apps worth checking out.  And hey, don’t forget to check out the ‘Radio’ feature on Spotify that could be considered like a Pandora alternative.

Let’s hear in comments which Spotify apps you use and any cool feature you like about it.  Don’t forget to +1 on Google+ and share on Twitter and Facebook to let your friends know about these Spotify apps.