What are the best alternatives to Google Reader?

Google just announced that it is shutting down Google Reader on July 1st, 2013 as part of Spring 2013 cleanup.

Many users like me who had so many RSS feeds (300+ or so) managed in Google Reader account are now struggling to find alternatives to Google Reader.  As a matter of fact, Google Reader wasn’t getting much attention from Google anyway.  Though it was the best way to manage and read RSS feed based news from all blogs.  It was indeed one of the most popular feed reader among users.

Most of us don’t understand why Google decided to shutter Google Reader.  They also recognize:

We launched Google Reader in 2005 in an effort to make it easy for people to discover and keep tabs on their favorite websites. While the product has a loyal following, over the years usage has declined. So, on July 1, 2013, we will retire Google Reader. Users and developers interested in RSS alternatives can export their data, including their subscriptions, with Google Takeout over the course of the next four months.

Still, all of us are unable to understand why Google will kill such a product that has a loyal following.  Many users have started to be frustrated about it.  Google+ trending topic is worth a read.  Here are some of the reaction I captured from Google+ and Twitter:

Wow, Google Reader shutting down. It really IS the end of blogging and old school newsreaders. Watch for “Subscribe in Google+.” 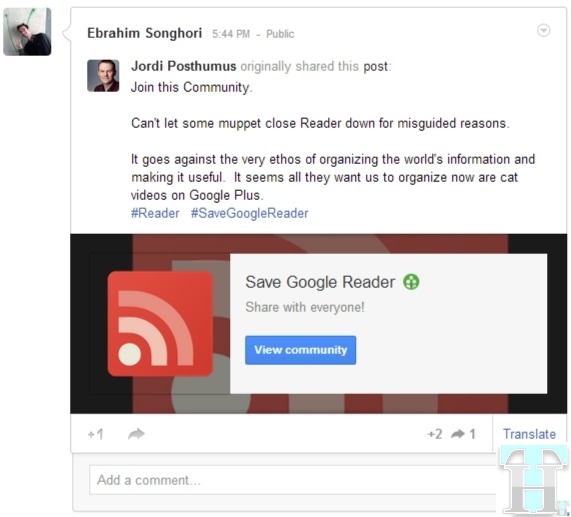 The best alternatives to Google Reader

Hands down, the best alternative to Google Reader.  Feedly has been reviewed on Techacker several times.  It seamlessly syncs with Google Reader and displays your feed in a very intuitive manner.  Frankly speaking, I stopped using Google Reader around a year or so back when I first used Feedly.  Since then I am a fan.

Don’t look any far, Feedly is the only thing that comes close to Google Reader.  Other alternatives to Google Reader available in the market today are in fact not entirely RSS readers.  They aggregate – they collect items from Google Reader, Twitter, Facebook, Google+ and other social networks and news channels etc.  Feedly also announced on its blog that the readers using Feedly as of today will be seamlessly transitioned to Feedly once Google Reader retires. 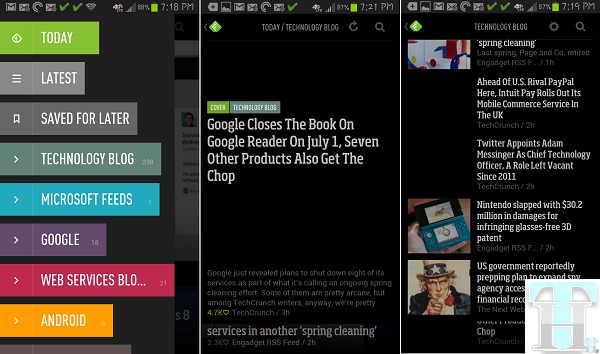 Agreed that today the mode of news/feed consumption has changed slightly.  We all have started to follow “What’s Hot” and Trending topics on social networks – whether it is Google+ Trends or the trending topics on Twitter.

Check out the following alternatives to Google Reader as well:

Flipboard is another great alternative.  It was also reviewed several times on Techacker.  Check out the review for complete details.

In short, Flipboard captures what you friends and followers are sharing on the web – whether it is Twitter, Facebook, Instagram or Google+.   All you need to do is add these channels to your account.

Flipboard also has a very smooth intuitive design that makes news reading more fun.  As a bonus, you get to know,  within one app, what is happening on all your social networks.

Oh and by the way, on Android and iPhone both Feedly and Flipboard look almost the same. Here is our comparison of Feedly vs. Flipboard:

Pulse News brings all your favorite blogs, magazines, social networks and newspapers in one place for FREE.  It also allows integration with various social networks similar to Flipboard.

Taptu categorizes all your interests in one app. Add your favorite web sites, blogs and social networks and transform them into gorgeous visual streams.

I haven’t used Pulse and Taptu, so can’t say how comparable they are.  You may want to check them out too.

I could never get used to Google Current interface.  Something is missing in that application.  May be it’s just me.

The last three alternatives are either Love or Hate.  You will either Love them or will absolutely hate them.  But it never hurts to try it once – may be you like it.